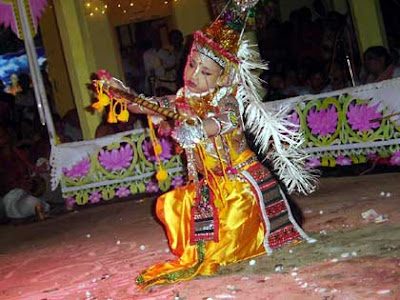 On Saturday, 24-11-2007 the auspicious observance of Maha-Ras, the principal festival and the foremost annual cultural event of Bishnupriya Manipuri Community in Bangladesh, was celebrated in a grand way and with great enthusiasm. The king of Manipur Maharaj Bhagyachandra (1763-1798) introduced Manipuri Raslila to Manipuri society and from the time onwards Raslila became the most important aspect of Manipuri culture. Since the mid-nineteenth century when the Manipuri Bishnupriyas and Manipuri Meiteis settled in Bangladesh, this festival has been observed in cooperation at Madhabpur Juramandav in Kamalganj upaziala of Moulvibazar district.

As per the records maintained by authorities, the first Maha-Ras ever held outside Manipur, was at Madhabpur Juramandav in 1842. This year is the 165th observance of the great festival. It was year 1971, when Maha-Ras observation didn’t occur due to the liberation war of Bangladesh. It needs mention that the Raslila performance which enchanted Rabindranath Tagore in 1919, was that performed by the Bisnhnipriya Manipuris of Machimpur, Sylhet and the teacher appointed from Bangladesh in Shantiniketon to teach Manipuri Dance was Guru Nileshwar Mukharjee from Kamalganj.

According to Vaishnavite scriptures, Raslila means the amorous play of Radha and Krishna with inthe milkmaids of Vrindaban. It reveals the sublime of metaphysical love of Radha and Krishna and of Gopi’s devotion to Krishna, the full incarnation of God. According to Manipuri Pandits, it is an attachment of the outward soul (Jivatma) to the supreme soul (Paramatma). The Maharas has been set forth particularly Ras-Panchadhya of Bhagavat-Purana. It usually celebrated in the full-moon day of Kartika (November-December). The foundation of Manipuri Maharas, techniques, costumes, ornaments and make-ups etc are believed to be revealed by Maharaj Bhgyachandra in his dream.

Befitting programs were chalked out to observe the festival at three historic Mandavs of Madhabpur Juramandav. The programs include Gusthalila, Nata Kirtan and Raslila. The first item was Gushthalila, the kind of dance wherein the story of Krishna and his Gopal friends is performed, by small children dressed as Krishna with Bashi’s(flutes). Krishna’s game with his brother Balarama, association with the Gopal’s, Yasuda’s love for her son, the coming of sage Narada to the palace of Nanda, the appearance of the demons Bokasur and Chanu-Moosti sent by Kamsa and their fight with Krishna-Balaram etc were invariably shown the dance item.

The male Nata Kirtan which began early in the night was a sort of prologue to Ras, where devotional songs were sung with the help of Kartals and Pungs (Drums). After the Kirtan is over, a Puja by way of invocation were held in the centre of the Mandav. Mondoli, the stage of Ras is provided with bamboo-pillars festooned with tender leaves, canopy of papers, embroidered curtails, etc. Illumination is provided with colorful electric lamps. According to the tradition, no audience is allowed to enter the dancing hall with their shoes on, everyone has to enter and leave with bare-footed. 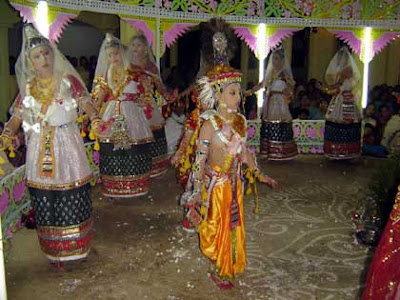 At a quarter past midnight, the Ras orchestra took place in the north-western directions of the Mandavs. They consisted for the most part, two pair of Pungs (sometimes mistakenly referred as ‘Mridanga’ although ‘Pung’ and ‘Mridanga’ are different things; ‘Mridanga’ is made with ‘Mri’ or earthen materials whereas Manipuri ‘Pung’ is special kind of drum made of wood and leather), Cymbal, Harmonium, flute Moipong and Selbong. The Rasdhari, who was the teacher, director and conductor of the dance, acted as the lead Pung player. Two or three female singers with Manjeela’s(mandira) in their hands, played the role of Sutradharis, who sang the songs of Krishna’s divine love play as described in the Bhagabat Purana.

‘Tai ri ta na ta na … ta na ‘ the Ras starts off with this traditional ‘Raga’ – a very popular concept among the singers and drummers. The Bhakti oriented manipuri kirtans makes use of six Ragas and thirty-six Raginis as set forth in the Govinda Lilamrita and Sangit-Damodara. Then the sequences such as Vridadevi’s arrangement of Kunjo, arrival of Krishna, arrivals of Radha and the Gopi’s at the appointed place, Krishna’s disappearance from the company of Gopi’s, Krishna’s separation from Radha, Radha searching for the Lord through emotional songs, reappearance of Krishna and the Gopi’s Prem-Seba to him, questionings of Gopi’s to Krishna and his answer, Krishna dance with Gopi’s and lastly the Gopi’s return to their homes at the end of the night were performed in due order. 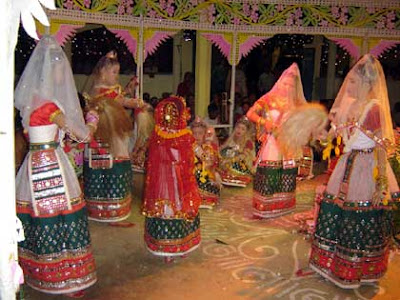 The Gopi’s were singing, speaking and dancing. The singings was in unison, it consisted of solo, duet and chorus which were alternated and interchanged frequently. The Sutradharis were singing mainly the arias of Radha in the background. The languages of the songs were mainly in Sanskrit, Maithili, Brajabuli and Bengali though few of them were composed in Bishnupriya Manipuri Language. The Oja said that the songs of Ras are set in Tintal (7 Beats and 3 Stresses), Tanchep (3 Beats and 1 Stress) and Menkup (3 Beats and 2 Stresses) in succession. There are also 64 variations of Sringars, the sentiment of love in consonance with the Ras theory of Manipuri Vaishnavs. The dance form has a well-confined and definite technique based on principles laid down by tradition. Closely related to the dance are the Parengs (series). The common one’s among Parengs are Vrindavan Pareng, Khurumba Pareng and Bhangi which are classical compositions of dedicated Gurus. The tradition is while presenting a Pareng the audience cannot leave the place till the presentation is completed. 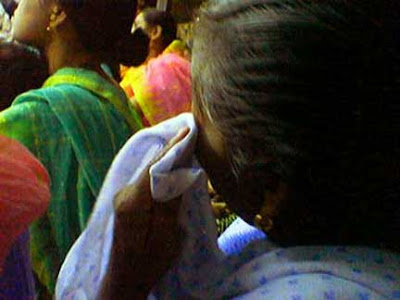 The Ras ended with the 'Arati' in which the whole audience stands up and takes part. Flaming trays of Candles and Agarbatis were brought into the arena before Radha and Krsihna.The Gopi’s were running their hands over the fire and touching their faces. The audience, with the sentiment of the religious devotion, seemed to be satisfied fully appreciating and drinking the nectar of Radha-Krishna Love, some of them were found shedding tears. They took the dusts of the feet of the Gopi’s and flowers from the Ras-Mondoli as sacred objects and place them on their heads.

Thousands of people irrespective of religious identity joined the festival.A Manipuri handloom fair was also held infront of Juramandav. The local government authorities and Kamalganj thana police have taken special measures to hold the festival peacefully.Raslila was also observed in some other different places like at Tetaigoan in Adampur, Jayashree in Habiganj and Paruwa in Sunamganj district. 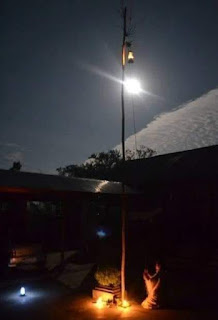